What is veterinary acupuncture?

It is derived from the ancient art of human acupuncture, and it is just one part of Traditional Chinese Veterinary Medicine (TCVM).  Dating back to 11th century BCE, this medical treatment has been used on domestic animals in ancient China and in the 17th century, it was introduced to Europe.  Gradually, it has evolved into a sophisticated medical treatment, both in the United States and throughout the world, and it has been applied to all animals who have their own defined acupuncture points for the treatment of specific medical conditions.  It can be used alone in a Traditional Chinese Veterinary Medical (TCVM) context or incorporated with Western medicine (Integrative Medicine).

How does disease occur?

According to Chinese medical theory, pain and/or illness is an indication that there is an invasion of disease-causing factors (external pathogenic factors) and/or a weakness (deficiency) or an excess or blockage (stagnation/stasis) of the energy that flows through the body.  This energy, known as “Qi” (pronounced “chee”), is responsible for all of the body’s dynamic and resting functions.  An imbalance of Qi results in disease.

How does acupuncture work?

Acupuncture, along with herbal treatment and diet modifications, is used to re-balance the body’s Qi to restore health and prevent disease.  It involves either the insertion of fine, disposable needles (a technique known as dry needling) or the injection of a small amount of sterile liquid- usually vitamin B12 or sometimes, Adequan (an injectable form of glucosamine).  This technique is known as aquapuncture.  Occasionally, a low level of electrical stimulation is applied to inserted needles to enhance their effect.  This technique is known as electro-stimulation.

Whether done by needles, liquid or electrical impulse, the goal is to stimulate specific points along the Qi pathways (known as meridians).  These sites are used to treat certain conditions, and this helps the body to eliminate obstructions and re-establish the normal flow of Qi.  Acupuncture points are located in small depression in the skin called “gates” where the pathways come closest to the surface.  According to the condition, the gates can be opened (tonify) to enhance or the gates can be closed (sedate) to suppress the flow.

In Western terms, acupuncture helps the body heal itself by stimulating nerves, increasing blood circulation and causing the release of hormones such as endorphins (the body’s way to relieve pain). 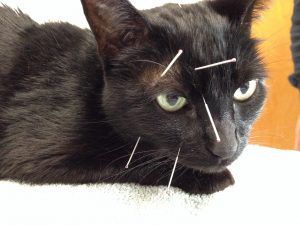 Which conditions can be treated with acupuncture?

It can be used for a variety of problems but especially for managing pain and compromised function resulting from:

Note that acupuncture, alone or in combination with Chinese herbs, can be usually be administered along with Western treatments for medical conditions.  However, that in most cases, the administration of steroids or narcotics is considered to interfere with the beneficial effects of acupuncture.  While acupuncture is not meant to replace surgery, and there are conditions that only surgery can correct (i.e. ruptured cruciate ligament or disc compression causing hind limb paralysis), it can be used to make a patient comfortable if surgery is not an option.   While acupuncture is not a panacea that can cure all ailments, it is useful tool that can help pets better deal with conditions brought on by aging and disease.

Is acupuncture painful to animals and is it safe?

Most animals tolerate acupuncture very well since the needles are small and thin. However, there can be some tingling or numbness associated with it, and some animals may react at the time of the needle insertion or occasionally, even before the needle insertion at the time of merely feeling the landmarks to find a point.   Usually, the owner’s cooperation is needed to gently hold and/or reassure the pet.  Occasionally, for both the safety of both the owner and veterinarian, the pet may need to be muzzled.  When acupuncture is done by a properly trained veterinarian, the procedure is safe and side-effects are rare.  Occasionally, some animals may temporarily (for about 1-2 days) be lethargic or experience a slight worsening of their condition before their condition improves.  It is a good idea to give small amounts of treats during the treatment session so as to provide positive reinforcement and to distract the pet for the needle placement process.  After the needles are in place, it is best to restrict the pet to a confined area for the 15-20 minutes in order that the needles better stay in since if the pet moves about, the needles are more liable to fall out.  Also, it will facilitate locating the needles that do fall out. 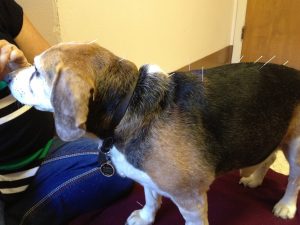 How long is the course of treatment?

The number of treatments used to treat a condition depends on the duration and the severity of the problem(s); the patient’s age, constitution and overall health.

Number of treatments– Acute (suddenly occurring) conditions are more likely to resolve with fewer treatments; however, note that while some conditions are truly acute, others that appear suddenly are sometimes the sudden worsening of long term diseases.  If truly an acute condition is being treated, an improvement may be seen in 1-2 visits.  If the condition is a chronic one, it may take several treatments before an improvement is seen. The longer the pet has had the condition, the longer it can take to respond to treatment.   It is not uncommon for patients with chronic conditions to be unresponsive until the 6 or 7th treatment, although some response is usually seen in the first 3-4 treatments.  Once a positive response is seen, the treatments are tapered off in frequency. 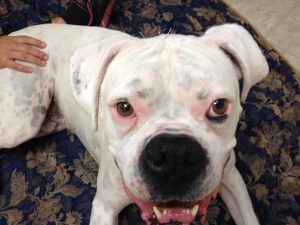